This is an interesting question because it brings up both physical sight as well as how cats perceive the world around themselves.

We know more about the former than the latter, so I am going to talk about that.

So, what do cats see through their eyes? Cats can’t see the same richness and saturation of color we can. They can see blues and greens quite well, but reds and pinks look more green to them, and purple looks bluer. They’d be closest to a red/green color bind human. Compared to humans, cats are very nearsighted.

Cat vision vs human vision: Not nearly as good as a humans vision in general, though quite a bit better than a dog – they see much more detail than canines.

The video below address the physical aspect of what cats see through their eyes:

Possibly their vision is comparable to a T. Rex in Jurassic Park, a fact which would likely please most cats.

How Do Cats See?

Cats eyes (and eyelids) are very different from ours.

Rods help with peripheral and night vision, brightness and shades of gray while cones help with color perception and vision during the day.

The cones, concentrated in the retina, give cats the ability to judge speed and distance – thus helping them make those acrobatic leaps.

Unlike dogs, cats can see color but it is more muted – they see color in a range closer to a color-blind human.

[Here is a great illustration with images to get an idea of how they might see.] And if you’re really interested, check out our post on how cats communicate with us humans!

We see both near and at a distance, but cats only see things clearly close up.

During the day, cats don’t see very well at all, and mostly see things to hunt by movement – this is why they lay so still and concentrate, they are looking for movement (like that T. Rex).

If you stand very still, your cat will have a hard time seeing you.

Cats do have a slightly wider field of vision than humans.

We see about 180 degrees in width and they usually see at about 200 degrees.

Cats have amazing vision in the dark.

While it’s an old wives tale that cats can see with their whiskers or in total darkness, this is not true.

They cannot see with their whiskers, nor can they see in total darkness – they cannot make light where there is none.

What they can do is feel with their whiskers – they can detect changes in air pressure and air currents with them.

Cats can maneuver around obstacles in a totally dark room by detecting the airflow around various objects… so cats don’t see with their whiskers, but they do use their whiskers when they can’t see!

[Please don’t ever clip or cut your cat’s whiskers.]

How Do Their Eyes Work?

For more help seeing at night, they have a structure behind the retina called “the tapetum lucidum in cats“.

This structure is reflective, you’ve seen the way cat’s eyes seem to glow when the light hits them in the dark.

That glow is this structure working, which actually captures and magnifies light.

So their eyes can take a little light and reflect it to make a bit more to see better.

This reflected light bounces between the rods and cones in their eyes, improving the night vision of both structures.

In addition, they have far more rods in their eyes than we do, which means they can see better in dim light – they only need about one-sixth as much light as we need to see at night

(or to put it another way, they can see six times better in the dark than we can). 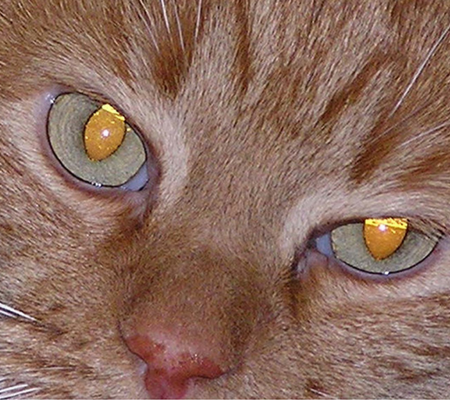 Their large corneas and elliptical pupils help with night vision as well. (doesn’t mean they are being aggressive)

Another benefit to having extra cones is that they see and perceive changes in small movements much more quickly than we do.

This helps them track small animals who make fast movement changes. We have more rods than cones, which gives us much better daytime vision but means we don’t see these little details.

If something moves very slowly, they don’t pick up the movement at all.

Next time you dream you are a mouse with a cat chasing you, just remember to move very slowly and the dream cat can’t see you.

Keep in mind that humans are naturally diurnal (day living creatures) while cats are nocturnal (hunt at night and sleep during the day).

Cats who live with humans tend to move to more of a diurnal schedule – though they will still be up in the night doing things while we are asleep because of those nocturnal instincts.

Cats may seem to sleep a lot (and they do, up to 20 hours a day) but they also nap during the day because they were awake at night doing important, instinctive cat things.

Just because your cat was on your bed when you went to sleep and is there when you wake up does not mean he was there all night.

And you said something about their eyelids?

Cats have the same two eyelids (upper and lower) as we do but they have a nictitating membrane.

Their upper and lower eyelids function the same way ours do, helping to spread tears around the surface of the eye, keeping it moist, clearing the surface of dust and particles and blinking reflexively to protect the eye.

The nictitating membrane, also sometimes referred to as a third eyelid, is located under their standard, outer eyelids and moved from the inside corner of the eye (closest to the nose).

This structure slides up when needed to protect the eye from scratches or when the eye is inflamed.

I see this mostly when they are sleeping:

Cats travel quickly through low obstacles, such at tall grass or bushes, and these membranes can protect their eyes from damage while still being translucent enough for them to see through.

Cat’s eyes are both like and unlike ours, both familiar and strange.

They have adapted structures and changes which make them uniquely suited to the life of a cat – and uniquely beautiful.

For information on cat tears or cat eye discharge, read our article here!

1 thought on “What Do Cats See Through Their Eyes?”